Jeez, I had a miserable weekend. Apparently, there’s some seasonal stomach bug going around, so I spent most of my Saturday and Sunday trying not to hork and waiting in the urgent care office. I’m not sure where I caught the illness from, but I did start to feel a little icky late Thursday night. I’m just going to say that The Game Awards were so miserable that they made me physically ill, and I don’t think anyone else who sat through it will argue with that assessment.

Most of the big year-end announcements happened during the VGAs, but there are still some very newsworthy topics that have emerged. Let’s start off by talking about a game that’s become too successful this year.

PLEASE DO NOT TRY TO PLAY THE FREE TRIAL OF THE CRITICALLY ACCLAIMED MMORPG FINAL FANTASY XIV, WHICH INCLUDES THE ENTIRETY OF A REALM REBORN AND THE AWARD-WINNING HEAVENSWARD EXPANSION UP TO LEVEL 60

2021 has been a banner year for Final Fantasy XIV, with the game reaching record-setting amounts of players. A lot of factors have contributed to this: the game’s overall high quality, the notorious meme and fervent fan social media posting creating FOMO for non-players, folks looking for a safe way to socialize amidst COVID, a new expansion generating massive hype, an exodus of former World of Warcraft players fed up with Activision-Blizzard’s shit – it’s all added up to make FFXIV the king of the MMORPG hill.

Unfortunately, as many who have been trying to play Endwalker over the past couple weeks have discovered, getting an audience with MMO royalty requires a great deal of patience, as an influx of eager players means that login queues have become hours long. Both seasoned FFXIV veterans and wide-eyed newbies are being forced to wait in a virtual line just to play, and that’s become a problem, which producer Naoki-P addressed in his latest community update.

Besides crediting current players with extra subscription time due to the long waits, Naoki-P announced that sales of FFXIV Starter Edition and Complete Edition will be stopped temporarily. Also, since FFXIV Free Trial players are lower on the login priority latter than paid subscribers (leading to them only being able to login during the wee hours of the morning), the program is being closed to new registrations. What really stuns me is that S-E is going so far as to stop advertising, simply because they have more players than they can handle. That’s absolutely wild.

“But can’t they just add more servers?” you ask. I’m sure that’s been considered – Naoki-P even addresses this later in the update, saying that S-E has considered establishing a new data center and adding servers, but that the current chip shortage is making that difficult. They’re hoping to have a plan in place by next month. Given the game’s explosive growth and international reach, it’s clear that the solution is not as easy as “just buy moar servers lol.”

Anyway, if I had a time travel machine, I would go back to fall 2013 and tell everyone playing the disastrous launch version “Oh yeah, in 2021, Final Fantasy XIV is so popular they have to take it off the market and ask people not to play it. Also, buy and stockpile a lot of Pokemon cards. Trust me.” I’m sure they’d laugh at me. But if only they knew

WHAT IN THE FRESH HELL IS HAPPENING AT DELIGHTWORKS

The big news in the mobile gaming sphere this week is that Aniplex, the Sony-owned production company that co-produces and markets a whole mess of popular Japanese series, has moved to fully acquire the game development division of Delightworks. Aniplex will be doing this by having Delightworks spin off its game development division into a new company, then acquiring that company in full.

For those not familiar, Delightworks is the developer of Fate/Grand Order, and also… um… Fate/Grand Order. That’s really their only big, notable thing. Yes, they’ve developed other games, but besides FGO things have been kinda rough. Most of their previous mobile titles have ended their services already… and at least one, the ill-fated Sakura Revolution, was a legendary disaster that was buried in under a year. They also had an agreement to co-develop/publish games with the browser/mobile game developer Aiming that fell apart last year. And FGO has seen a revenue dip as of late. So, aside from co-producing Melty Blood: Type Lumina alongside Aniplex, Type-Moon, and French Bread (the latter of which did most of the heavy dev work), Delightworks hasn’t been doing so hot.

This move has led folks to speculate that Aniplex basically wants to acquire and turn Delightworks’ game development into a team laser-focused on FGO. Fate/Grand Order is still making ridiculous amounts of money – it’s just not making as much money as it did a couple of years ago, thanks to increased competition and the natural lifecycle of big games-as-a-service having waxing and waning periods. But, y’know, capitalism puts growth above all else, and not seeing more money come in year after year is a problem in corporate eyes. Also, many fans have speculated that Sakura Revolution and other doomed Delightworks projects have been taking resources away from FGO, though it’s difficult to say how true that is. This is a perception that Aniplex no doubt wants to fix, and an acquisition like this is one way to do it. 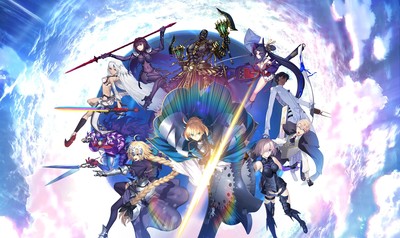 One thing that I’m curious about however, is… what else does Delightworks do besides make games? I mean, if they’re spinning off their game dev division for Aniplex to acquire, that means they do other stuff, right? I’ve gone looking for info, and I’ve found that they have a small merchandising division, as well as a board game development team and a small arm for publishing indie games in Japan… but wouldn’t board game and indie game publishing be part of the game division as well? Subtract FGO and other games, and what else worthwhile is there? I’m honestly not sure how what remains of the company plans to survive.

Also, what about former Capcom and Street Fighter producer Yoshinori Ono, who joined Delightworks with a lot of fanfare earlier this year? Is he going over to the new Aniplex-owned game development firm, or is he going to stay with the gutted Delightworks husk company? I have so many questions, but none of the articles or press releases I’ve seen so far address any of them. I always hate ending news sections on a generic “wait and see” note, but… not much else to be done here right now, I’m afraid.

The Arc System Works/Eighting/Nexon co-created DnF Duel has continued to rapid-drop character trailers over the past week, with one big surprise: there’s an open beta happening! This weekend! Yes, as of later today, you will be able to download the DnF Duel beta client for your PS4/PS5 and play online!

There’s just one problem, though. As announced at the TGA pre-show last week, the second open beta for King of Fighters XV is also happening this weekend, meaning a lot of players are going to have to choose between dedicating most of their time to either one or the other. I’m sure the Nexon marketing team had this all planned out – rapid-dropping trailers out of nowhere to generate hype, then surprise reveal an open beta happening soon after on a weekend where they thought nothing else was happening  – only to have SNK jump out and use the big awards show to tell everyone days before Nexon‘s reveal that hey, we’ve got another test drive for the new King of Fighters that same weekend. I’m also sure that there was a lot of cussing amongst said marketing team immediately post-VGAs.

Anyhow, yes, you can play either KoFXV or DnF Duel this weekend, possibly both if you can spare the time! What bugs me about the latter is that there’s been practically nothing revealed about the game beyond brief character trailers. What are the mechanics like? Is it using rollback netcode? Who are the specific Arc and Eighting staff involved? We won’t know any of this until the open beta hits. I’ve got a gut feeling this beta might be a total mess – the sudden influx of trailers without much actual game information doesn’t inspire much confidence. Here’s hoping I’m wrong.

Meanwhile, Cygames dropped two new fighters, Vira and Avatar Belial, into Granblue Versus during their recent online-only Granblue Fes 2021. The characters are available… right now! Also available is a new package edition of the game that includes all of the previously released DLC characters. The base version of the game without any DLC is now priced at $19.99.  Still not available: top-tier netcode.

Oh yeah, speaking of Granblue Fantasy, there’s a new trailer for the long-in-development-hell Granblue Fantasy ReLink, which is now confirmed (to the degree that anything in COVID-world can be “confirmed”) for a 2022 release on PC, PS4, and PS5. Check it out!

Well then, that’s all of the big breaking news for this week! Next time, I’ll have a review of a game I’ve been looking forward to quite a bit, so you can look forward to that for the Christmas weekend. So, what are your takes on this week’s developments? Are you still stuck in line to log into FFXIV? Excited/worried about the future of FGO? Planning on jumping into any open betas this weekend? You’re always welcome to sound off (civilly!) in the forums, which are conveniently linked just below the article. Thanks as always for reading, and I’ll see you next week on the night before Christmas!