From the beginning of early access on PC up until the final version of Rising Hell releasing today for Xbox One, there was a lot of input from the players and community. We are incredibly grateful for all their feedback as it has made Rising Hell into a bigger and better game. We want to extend our deepest gratitude for the contribution and support of all the fans of Rising Hell. Without you, this game wouldn’t be what it is today.

Rising Hell is the first game developed by Tahoe Games that is released for PC and consoles. It is a milestone for our small studio to be able to join the indie game industry on a more global scale. We also want to say our thanks to Toge Productions and Chorus Worldwide who helped us reach this dream.

The first concept of this game was created due to our passion for indie games and pixel art. We saw an arcade game that was designed with pixel art that was simple, yet its game-feel and action were very satisfying. Seeing the game’s success, we were inspired to follow its path. One day, we decided to have our own internal game jam to create a similar game with modified gameplay to give it our own twist.

At the start of our humble game’s journey, we chose the theme “Escape from Hell” to give a dramatic background story. The direction of the gameplay is a vertical scrolling style from below to above. For the sake of the theme, we didn’t want to give an impression of a hell that is dark and gloomy. On the contrary, we want to bring our version of a fiery hell full of brutal action and horror. In Rising Hell, we don’t want to show the human death that is full of mystique and gloom. It is but a hell where the survival of the fittest rules. We are confident that the gameplay and artwork of the game successfully reflects the theme.

In Rising Hell’s story, players will take control of Arok, Zelos, and a few of hell’s other fighters in their effort to conquer hell’s highest order. Each fighter is decorated with their own rich background stories and motives, on top of unique playing styles that are individual to each fighter. Players will learn about these characters’ stories by going through Rising Hell together with these hell fighters.

Players may find it difficult, constantly being defeated by their enemies. Because that is how Hell is in Rising Hell. Players can consistently practice, get used to different characters, finding new strategies, as well as studying the patterns of each stage to beat all available stages of Rising Hell. On top of trying hard, players are also given the options to have strategies in the form of Item Relics as part of their adventure supplies, as well as choosing Skill Talents that suit their individual gaming style. To add even more adrenaline to this already adrenaline-pumped game, players will also be accompanied by strong heavy metal riffs throughout their adventure.

Keep trying and don’t give up! We dedicate this game for the players that keep pushing their limits and favoring difficult challenges. Join the rising and play Rising Hell today on Xbox One! 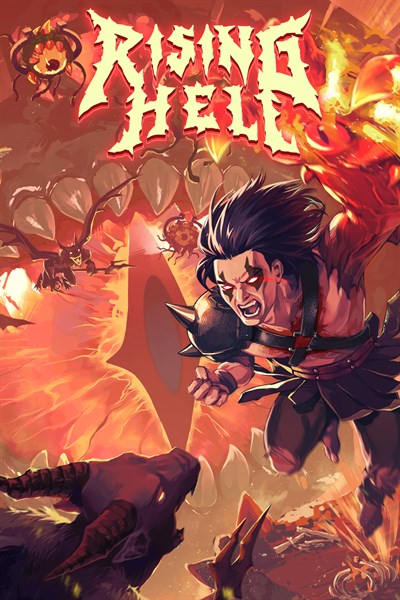 ☆☆☆☆☆
12
★★★★★
$9.99
Get it now
Rising Hell is a vertical platformer rogue-lite filled with adrenaline-pumping action and tons of heavy gothic metal shreds. Climb out from the ever-changing hell while you fight hordes of blood-lusting demons.

ABOUT THIS GAME:
Fight your way through hordes of blood-lusting demons and escape hell as you unlock new characters and talents to create chaos in the randomly generated and ever-changing landscape of hell!

Heavy-metal riffs and pixelated madness will accompany you as you fight your way out from the depths of fiery hell, facing the bugs-ridden Beelzebub’s Lair, and other pits of hell with different creatures, bosses, and living traps lurking around. Chaining combos, jumping maneuvers, and talent building will be your key to help you climb your way out of hell in this adrenaline-pumping vertical platformer.

FEATURES:
– Vertical Rogue-lite: Climb out of the ever-changing procedurally generated hell while the ever-present threat of permadeath fills your veins with adrenaline.
– Epic Boss Battles: Slay gigantic ancient demons such as Dagon, Beelzebub, and many more.
– Multiple Game Modes: Choose between campaign and challenge modes complete with its own leaderboards.
– Unlockable Characters: Play and unlock different characters that will give you a variety of different playstyles and strategies.

Related:
Rust Console Edition Tips and Tricks
Escape to the Deep Woods in The Wild at Heart
Formula 1 is Revved and Ready for Rocket League