By this point in Outriders the Anomaly has thrown at lot your way, but now one of Enoch biggest beasts blocks your path: the Chrysaloid.

While you’ve gone toe-to-toe with some giant bosses already – you’ve never faced anything quite as angry as the Chrysaloid so far.

This is a multi-phased battle, just like the Molten Acari at the top of the volcano, and requires some careful tinkering with your loadout to defeat.

At first, because its attacks are so different from the other enemies in Outriders, it can feel like the Chrysaloid is pretty unfair – but once you find a couple of sneaky tricks and learn its weaknesses, things get a whole lot simpler.

Outriders Chrysaloid – How to beat the forest boss

Before you enter the Chrysaloid’s lair, there are a few things you need to consider.

Due to the distances involved in this boss fight, a medium-long-range weapon is an absolute must.

Especially in the second phase of the battle, things like shotguns and full-auto submachine guns are going to lose a lot of their effectiveness, simply because the Chrysaloid is too far away.

Grab your best AR, rifle, or burst fire SMG, and you’ll have much better time.

As well – if you’re not a Technomancer – it’s highly recommended that you pack a primary or secondary with weapon life leech.

The Chrysaloid deals hefty chunks of damage with massive attacks, rather than whittling you down over time. Since most of the fight is one-on-one, you need a reliable method of staying healthy when you inevitably take a hit.

Next, you need to determine your skills.

Like with your primary and secondary, ditch any skills which exclusively work at short range, or place you behind an enemy – since they likely won’t work.

This should leave you with enough room to bring any skills which give you a shield or barrier, or buff your bullet damage.

These let you not only tank hits, but make the most of your limited opportunities to strike back.

As well as these, in the second part of the fight you’ll need to kill some tough Strix enemies very quickly.

This means you should bring anything you can use to slow down or deal additional damage to single targets.

How to clear phase one of the Chrysaloid in Outriders

When you drop into the Chrysaloid’s lair, you need to focus your fire on the creature’s head and the red pustules around its midriff to deal critical damage. 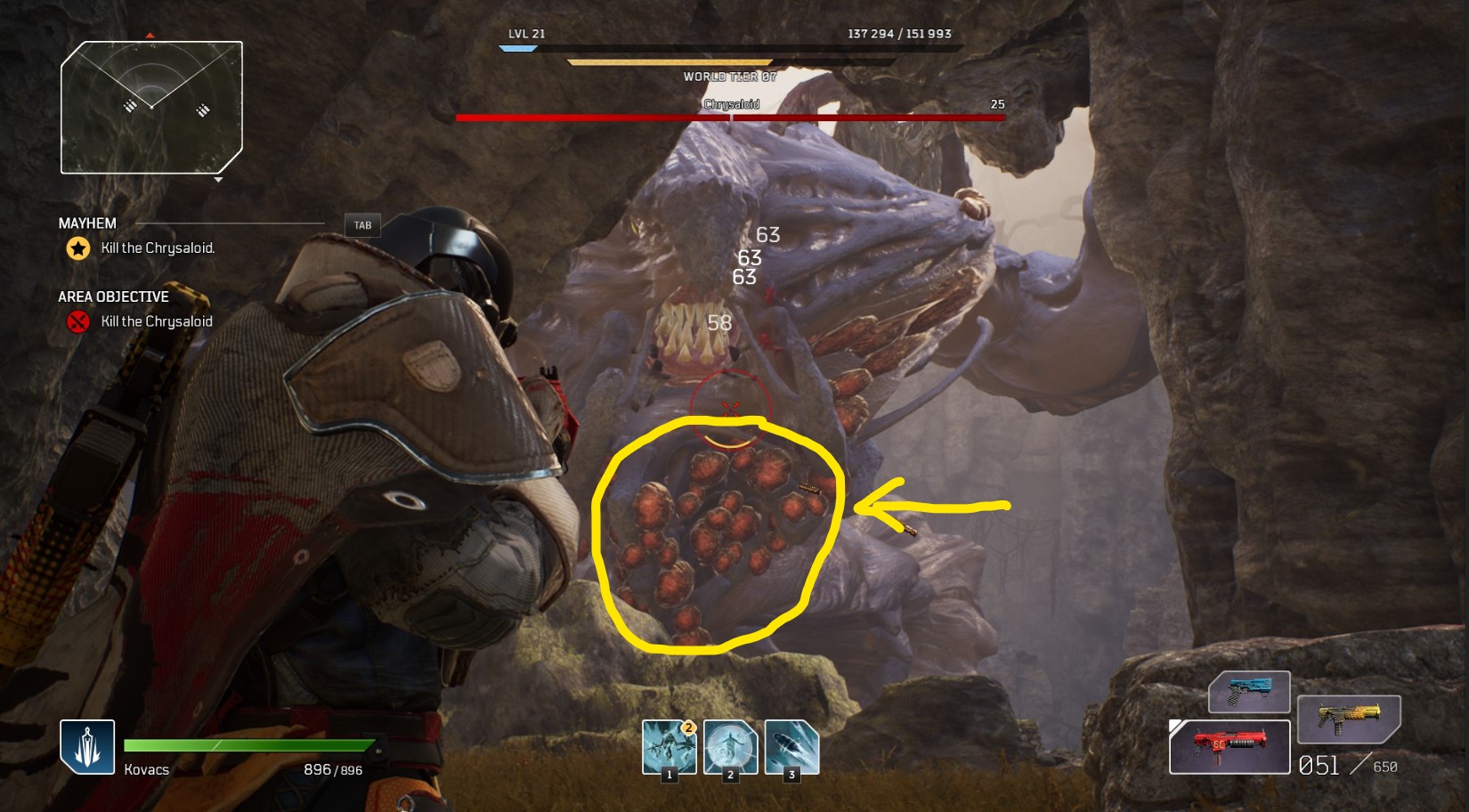 All of the Chrysaloid’s attacks are dangerous and difficult to avoid, which is why life leech weapons and skills that bolster your resistance with a shield are so good.

However, the easiest way to avoid harm is to loiter on the right-hand side of the arena, where you’ll find the cave wall blocks a lot of the beast’s attacks.

There’s also a tall rock here that you can hide behind when the Chrysaloid does its sweeping beam attack that leaves a red trail along the ground. 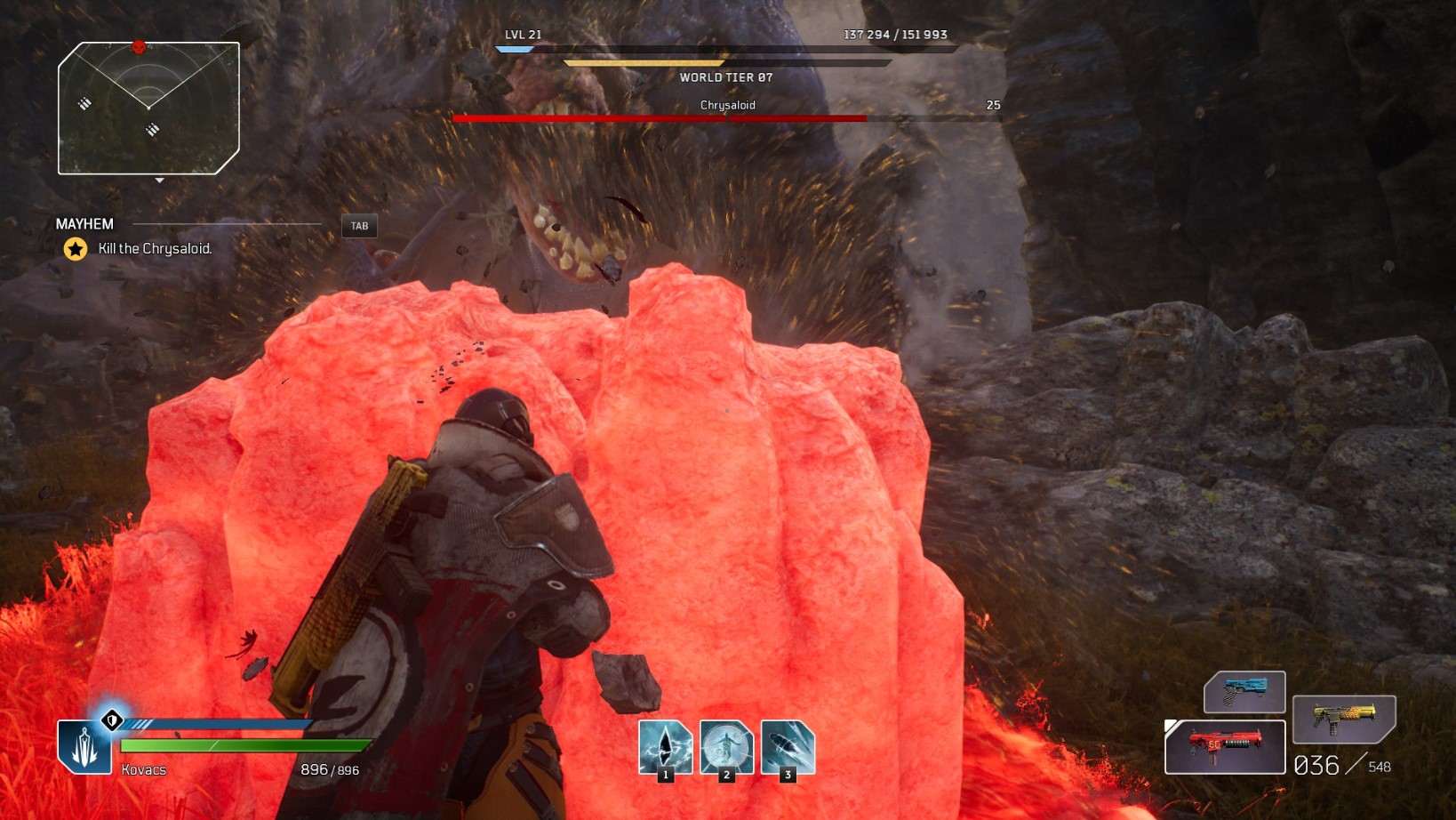 To avoid its other attacks, namely where it lunges and swipes at you with its claws or when it drops rocks on your head, you also need to look out for these red markers on the ground.

They’re very difficult to see while you’re aiming, so make sure you periodically stop shooting and take in your surroundings to sprint to safety.

After a while the Chrysaloid will destroy the right-hand wall of the cave. When this happens, you’ll have to be more careful and proactive in avoiding the red markers without this extra protection.

Eventually, when you’ve dealt a fair chunk of damage, the Chrysaloid will climb up over the cave to rattle the roof and drop projectiles.

When you see this happens, you’ll get a better sight line at the exposed red pustules on its underbelly, towards its tail, which you can shoot for extra damage.

Once the first portion of its health bar is depleted, a cutscene will play and the arena will change.

How to clear phase two of the Chrysaloid in Outriders

In this water-logged basin, you have none of the protection of the cave to help you.

Luckily however, the Chrysaloid will move backwards and forwards away from you, giving you some time to breathe if you play your cards right.

With more of the monster in view, you can now focus your fire on the red pustules on its shoulders as well as its underbelly to deal extra damage – again, these are its weak points. 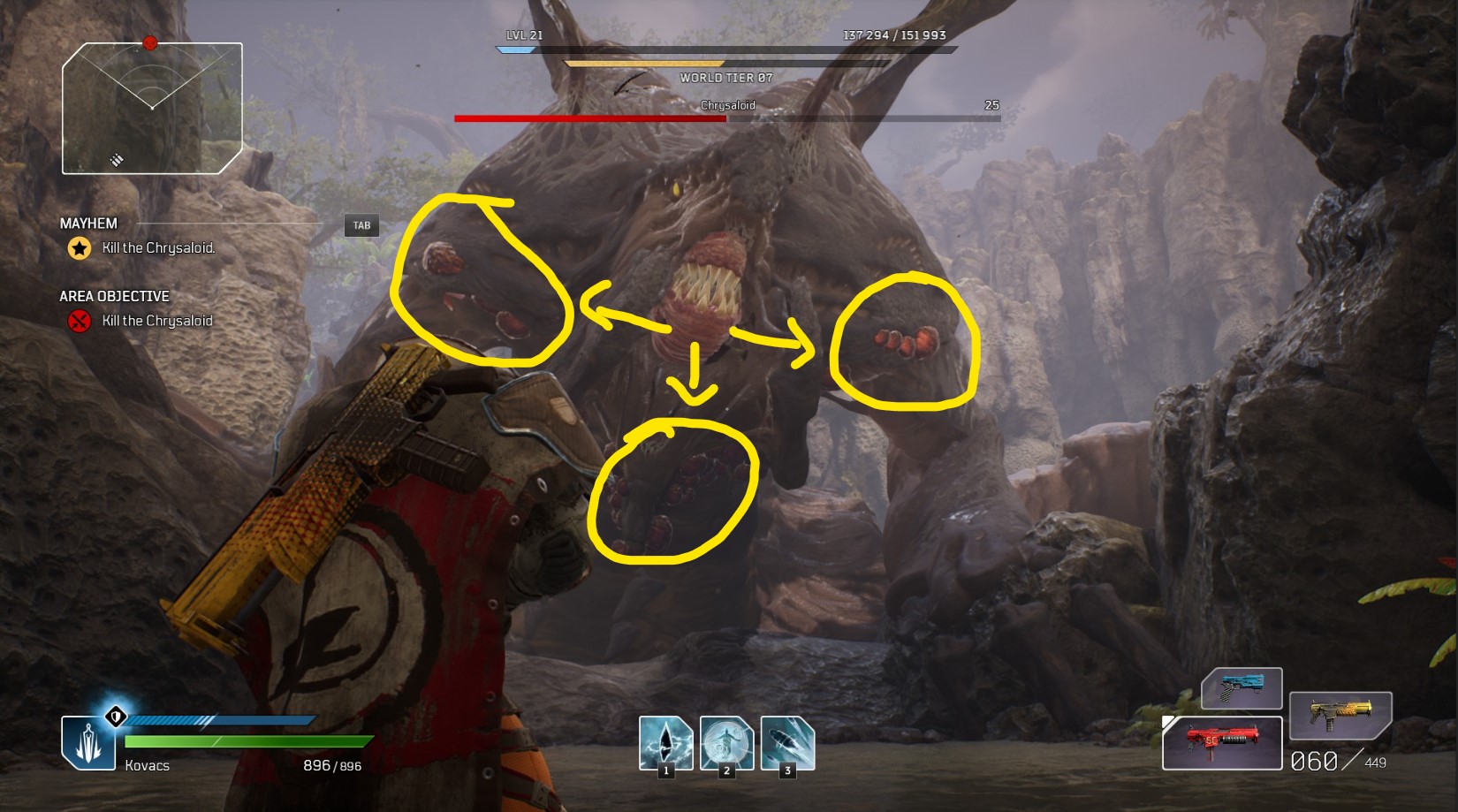 To avoid the Chrysaloid’s basic attacks, you once again need to look out for and dodge the red markers on the floor.

However, since you don’t have a friendly rock to hide behind, when the Chrysaloid winds up to do its sweeping beam attack you need to sprint towards the monster so the blast goes over your head.

Continue to shoot the pustules, and eventually some flying Strix will spawn – because that’s what this fight needed, the most annoying enemies in the game to buzz in and ruin your day. 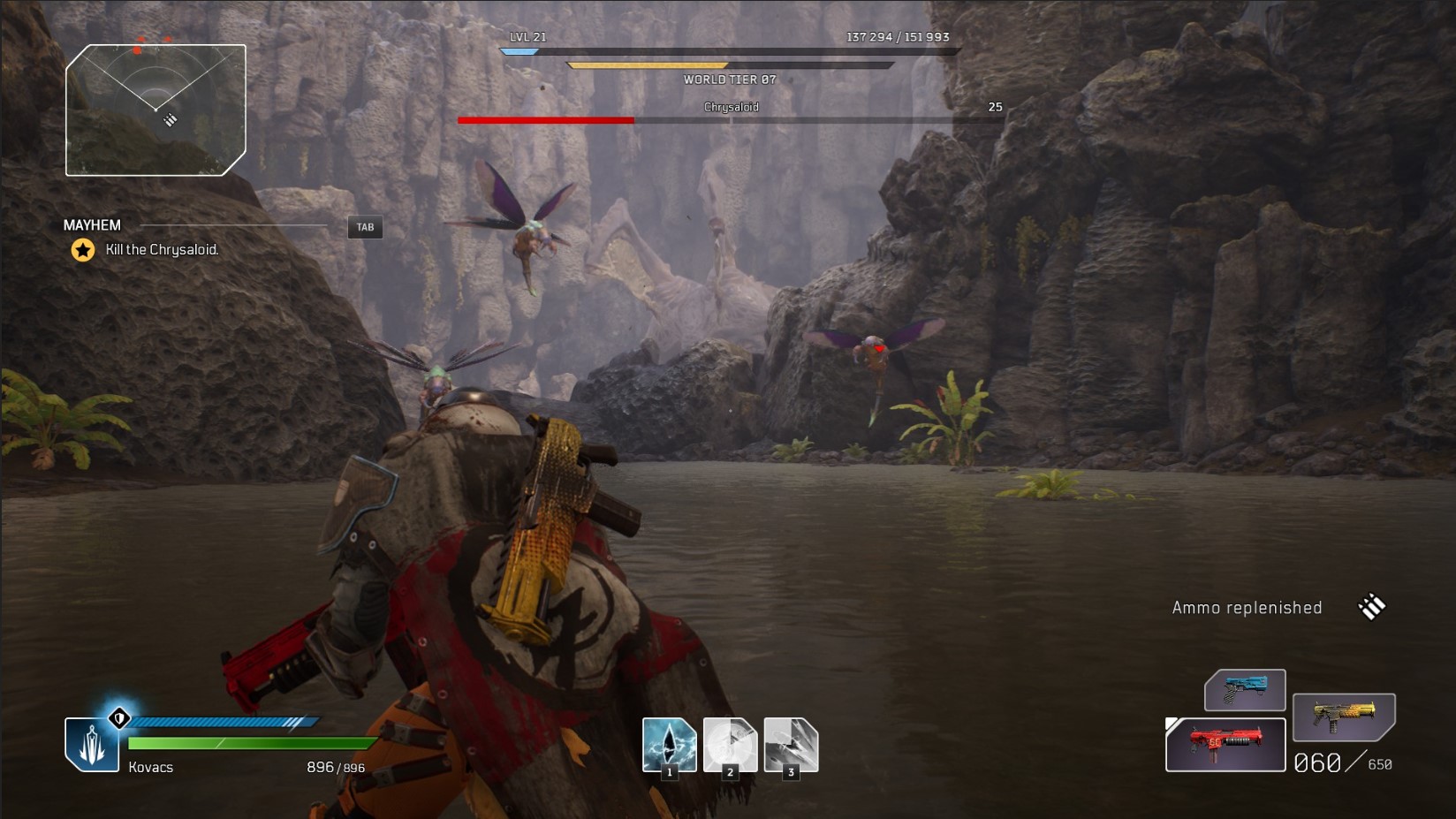 As soon as they appear, you need to focus your whole attention on the Strix, or they’ll just kill you.

Deploy whatever slowing or damaging abilities you have to take them down as quickly as possible, then return to fighting the Chrysaloid.

Repeat this a couple of times and you should whittle the beast’s health down to nothing! 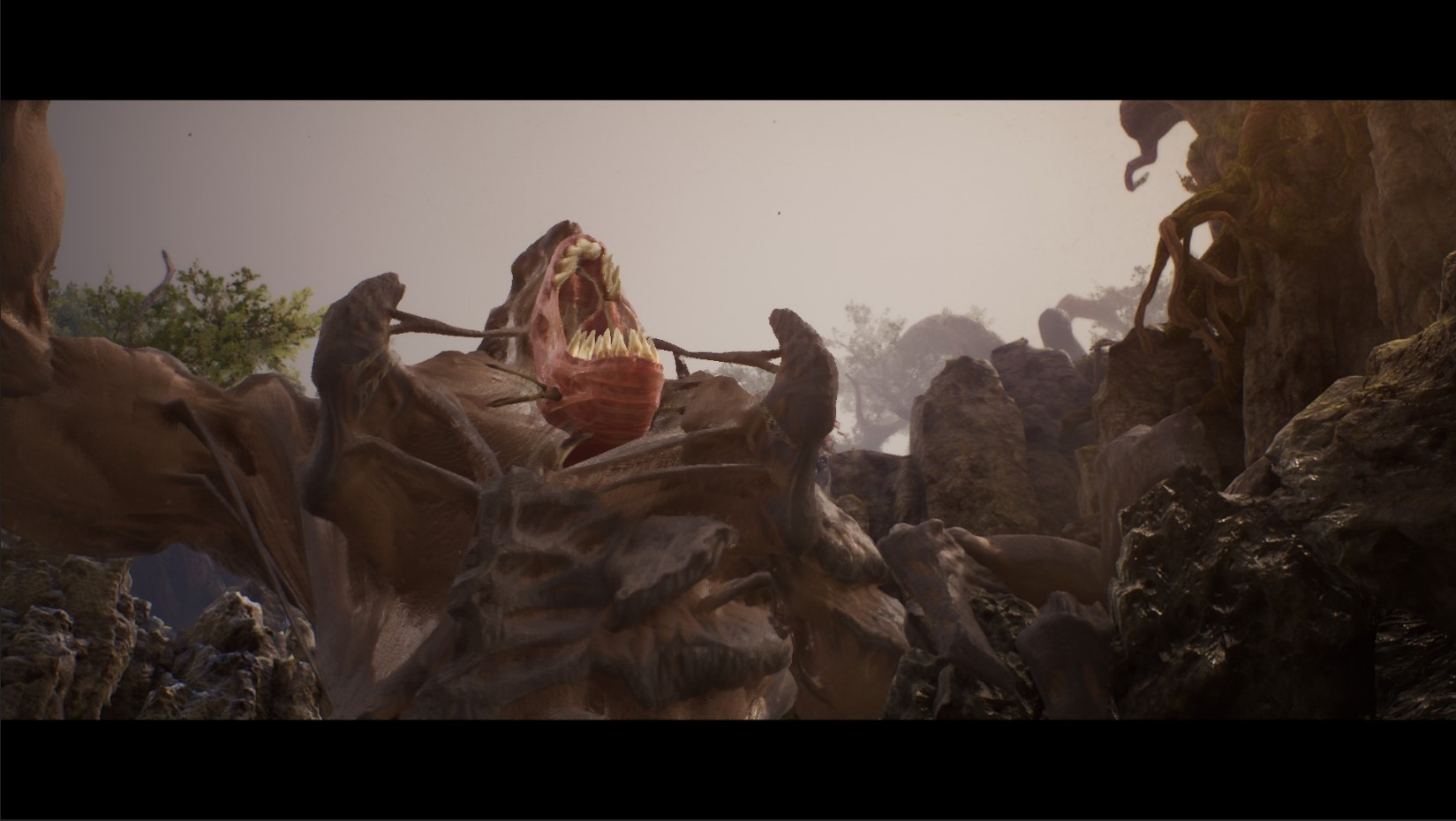 I’ve gotten quite lucky with this fight dropping Legendary Weapons, so hopefully you’ve got some choice loot to sort through.

Otherwise, this is your cue to continue through the main story of Outriders.

The post Outriders Chrysaloid | How to beat the forest boss appeared first on VG247.