Today marks the Xbox One release of Hitchhiker, a narrative mystery game about the world’s strangest road trip. In Hitchhiker, you play as a traveler with no recollection of who you are or where you’re headed. Your job is to piece together the memories of your own backstory and solve environmental puzzles by following clues from drivers you meet along the way. The production of Hitchhiker itself has been a long and winding journey, full of twists and turns and many things learned.

It was early 2016 when Patrick Rau (Mad About Pandas’ managing and co-creative director) pitched me on the idea of Hitchhiker. “Everyone’s made a driving game,” he pointed out. “Nobody’s made a passenger game.” The idea was simple, with clear limitations that I liked: As a hitchhiking passenger, you can’t drive, you can’t walk— you can’t do much of anything. When working on a new idea, there’s often nothing more liberating than constraints: taking a bunch of options off the table at the start makes it easier to find inspiration, since you are no longer staring at a blank canvas of unbounded possibilities.

Our first conversations about the game were all about mood: a particular autumnal vibe we imagined, a surreal highway full of hidden correspondences. You open up the glovebox in one person’s car… there’s a photo inside that you saw in the last car. The driver nonchalantly acknowledges this fact, but doesn’t seem to find it strange. How did it get here? When I think back to this process, it seems back-to-front in terms of how one would normally create a game: we began with an atmosphere, then created snippets of dialogue to support this atmosphere. Next, characters were imagined who could say these lines. Only when the feeling of Hitchhiker was thoroughly grounded did we start to fill in plot specifics and puzzle interactions, allowing them to take shape organically from the mood that had been established.

Patrick and I have both spent time living in the San Francisco Bay Area (indeed, our friendship and creative partnership originates out of this shared experience). Northern California is a great place for road trips, and I remember clearly some of the conversations that I had while sitting in the passenger seat on the highways of that part of the country. There’s a special kind of switched-on mental state that happens here, when your senses are filled with the highway flying by, your body is at rest, and so your mind is completely free to engage with the process of talking to another person. It is this feeling of deep conversational immersion that we wanted to recreate as the core game experience in Hitchhiker.

The development of Hitchhiker followed a progression similar to a long car journey, where you can hardly imagine reaching your faraway destination as you pull out of the driveway — yet, before you know it, you’re speeding along the highway, making good time. An initial art trailer caught the attention of Kill Screen, who did a short write-up that got Humble Bundle interested in the project. The Hitchhiker First Ride prototype was released as a Humble Original in 2018 and led to support for the full production. Today, we’re happy to release the full five-ride game to the world, and want to thank everyone who’s hitched along for the ride so far. 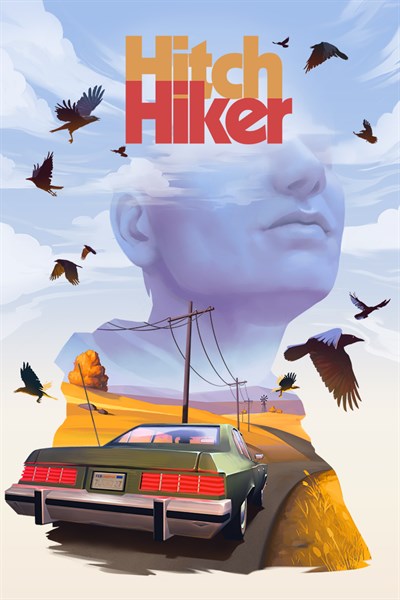 ☆☆☆☆☆
1
★★★★★
$19.99
Get it now
Hitchhiker is a mystery game set along lost highways, where your goal is to solve the puzzle of your own backstory. As a hitchhiker with no memory or destination, you catch a series of rides across a strange and beautiful landscape, tracking the mysterious disappearance of a person close to you. Your drivers range from stoic farmers to off-duty waitresses, and each one has a story to tell. Clues appear, alliances emerge, and nothing is quite what it seems.

As your journey continues, you must decode the events of your past while confronting the dangers that lie ahead. Hitchhiker is a road-trip odyssey about exploring the unknown in order to find yourself.

• Hitchhike across a strange and beautiful landscape in five rides with five total strangers who will challenge your grasp on reality… And maybe your philosophy on life.
• Solve environmental puzzles, and keep an eye out for clues, in order to uncover your mysterious past.
• The choices you make when speaking with the drivers will reveal your own dark secrets.