Rating: Everyone 10+
Reviewed on: Xbox One
Also on:
PlayStation 4, Switch, PC

Stepping onto the court for a dodgeball match used to either fill you with excitement or dread depending on where you stood in the gym-class pecking order. The same could be said of multiplayer shooters, as poorly matchmade games deliver feast or famine results based on your level of skill. Knockout City masterfully combines the best from both dodgeball and multiplayer shooters to create an experience that is frantic, fun, and welcoming to players of all skill levels.

Joining a match is hardly an intimidating affair thanks to Knockout City’s streamlined gameplay. All you need to know at the start is that you find a ball on the map, then find someone to throw it at; the game automatically locks on to targets, making the action less about how elite your aim is and more about the strategy of how to approach each rubber-ball firefight. Once you have the basics down, you can learn different kinds of trick shots, ways to capitalize on the various special balls, and how to master the timing of catching incoming balls. These matches become fast-paced, so gaining a keen awareness for when you’re targeted (as indicated by a red outline on your screen) and learning how to read when balls come your way is where most improvement occurs.

As I learned to contextualize the action and strung together effective plays, the excitement ramped up. In one chaotic sequence, I was at a two-on-one disadvantage, and both opponents had a ball. As the first one fired at me, I timed my catch perfectly, which immediately gave me a pre-charged throw, allowing me to fire back at the thrower at full speed before they knew what hit them, knocking them out. Then, I dashed to avoid the second incoming throw, snagged another nearby ball, and performed a spin move to put a curve on my throw, wrapping it around a pole and hitting the second opponent from an unexpected angle. Moments like that, where you flow from one satisfying move to the next off instinct is supremely rewarding, making you feel like a dodgeball master.

Despite moments like these, all modes (save for the tense one-on-one Face-Off mode) place you in two teams of three. Teams do more than just even the odds, however, as you can interact with your teammates to perform stronger attacks. Balls gain an instant charge when you pass them to a teammate, letting your friends immediately fire them off at full speed to deliver the final blow to an enemy player. Players can even turn into a ball themselves, allowing teammates to pick up and throw each other at enemies, or perform an ultimate attack which turns the held teammate into a bomb that rains an area-of-effect explosion on targeted players.

Knockout City’s five maps are entertaining playgrounds full of concentrated battlefields, naturally flowing lanes, and unique obstacles. I loved the rotating center structure of the Galaxy Burger map, while the opposing skyscrapers of Rooftop Rumble creates intriguing dynamics with the two teams. The maps are also well populated with balls, meaning you’re rarely struggling to find something to fire your opponents’ way.

Scattered through traditional matches are special balls that augment your dodgeballs so they explode, gain extra distance and speed, and move with moon-like gravity. These power-ups are rare in most modes, but they take center stage in the over-the-top Party Team K.O. where all standard balls are replaced by special balls. Those matches are exciting and unpredictable, but the chaos can be a little too much at times, and during a typical play session I would migrate back to standard Team K.O. after a few Party matches.

Every action you take counts toward a suite of goals listed in the menu. These objectives range from scoring knockouts with a particular type of throw to assisting your teammates in various ways. As you complete objectives and level up, you earn cosmetic rewards and Holobux, which can be traded in for rewards like new outfits, emotes, and gliders. Thankfully, all the upgrades are cosmetic, meaning nobody has a competitive advantage from unlocks.

Outside of the approachable gameplay, perhaps the biggest boon to making sure everyone can enjoy Knockout City together is the fact that the title supports crossplay and cross-progression. Without any issues, I was able to party up PC players while I played on my Xbox. I still needed to find each player’s in-game player name, but the intuitive social menu makes connecting with friends and recent players a breeze. You can also join a Crew, a unique twist on the traditional Clan system, letting you further customize your character with a logo, vehicle to enter the match, and more. You also earn additional rewards and experience when you play with your Crewmates.

Unfortunately, Knockout City lacks significant content at launch. The game contains four base modes and only five maps. Developer Velan Studios has ambitious plans for post-launch life, including new maps, modes, and playlists, but that’s all still forthcoming. The existing content is strong, but I grew weary of what was initially on offer after a few short hours.

Content concerns aside, Knockout City has a superb base to build off. With gameplay that eases you in, then encourages you to experiment with those mechanics to increase your mastery, Knockout City offers a refreshing take on both the multiplayer shooter and the classic game of dodgeball. 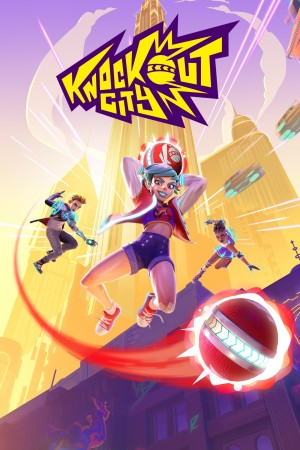 Summary: With a fun core, approachable gameplay, and intense rubber-ball firefights, Knockout City lets everyone get in on the enjoyable dodgeball action.

Concept: Replace the guns typically found in an arena shooter with dodgeballs to reimagine the gym-class staple

Sound: A fun soundtrack complements the battles well, but the star here is the true-to-life thud the dodgeballs make on impact

Playability: Easy to pick up but tricky to master, Knockout City offers fun for players of a wide range of skill levels

Entertainment: At launch, Knockout City lacks in content, but it makes up for it with a strong base game and a ton of potential to grow in the future